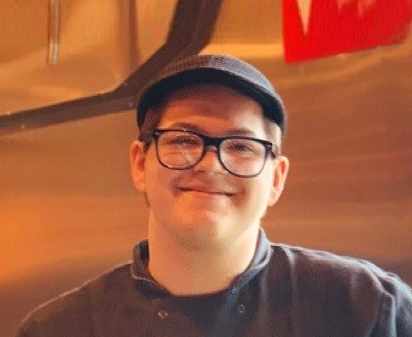 Micah was nominated for a Cape Fox Spotlight by Cape Fox Lodge Office Manager Michelle Lewis.  She noted that,

“Micah is always excellent in achieving customer satisfaction; whether he is at the host stand, bussing tables, answering phones or behind the line leading his culinary crew at 108 -his goal is to achieve greatness.  He strives to continue to bring Ketchikan new and delicious dishes that are works of art, and instructs his team with positive words and encouragement to try new things.  Always smiling, Micah exudes a happy-go-lucky attitude that is contagious when you are around him.  When he isn’t busy Chef-in’ it up for Cape Fox: he can be found spending time with his friends and family, keeping his musical skills up-to-date and attempting to master the ever challenging game of Disc Golf.  Micah’s a young man with a bright future ahead of him, and his talent and culinary skills are immense for his age, along with his overall disposition.  Thank you Micah for all your hard work and dedication over the years, to our Cape Fox Team!”

The Cape Fox Tinàa Award for Employee Excellence is presented to those employees who stand out for their dedication and performance, and Micah exemplifies this idea.  He is a dedicated team player, and we are delighted to give him this recognition.  Thank you, Micah!