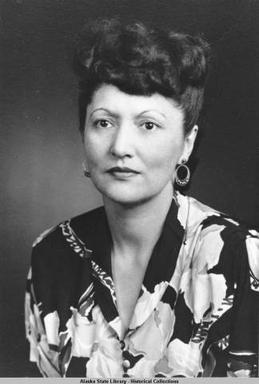 Elizabeth Peratrovich was a Tlingit from Alaska born in 1911.  She grew up during a time of heightened discrimination. Alaska Natives were segregated with separate schools, hospitals, theaters, and restaurants.  Elizabeth, along with her husband Roy, devoted their lives to end that discrimination.  It started with a letter to the Alaskan Governor, and it led to a speech on the Alaskan State Senate floor by Elizabeth.  They so staunchly supported their cause; they left their three children in an orphanage one summer to travel across Alaska to advocate the state passing an Anti-Discrimination bill.  In 1945, a law which had already passed in the State House was on the State Senate floor, and it opened for public comments.  Elizabeth Peratrovich was only 34 years old at the time.  She put down her knitting needles and stood, taking the podium.  In a soft, clear voice, she told her family’s story.  She did not yell nor wave her arms but simply and clearly gave examples of the injustices she and her family faced because they were Alaska Natives. When she was done speaking, everyone in the room stood and applauded.  On February 16, 1945, the Alaskan Anti-Discrimination Act was signed into law.

In fact, on that day in 1945, Alaska became the first state to pass a broad anti-discrimination law nearly two decades before passage of the federal Civil Rights Act of 1964. That is why every year Alaska Native Corporations honor Elizabeth Peratrovich and her advocacy of human rights on February 16th. That is why everyone should celebrate her.  She was not loud and brash but spoke of her family and her experiences.  She was advocating not just for herself and Alaskan Natives but for everyone to have fundamental human rights.  Cape Fox Corporation is proud to honor Elizabeth Peratrovich and what her work meant for our future.