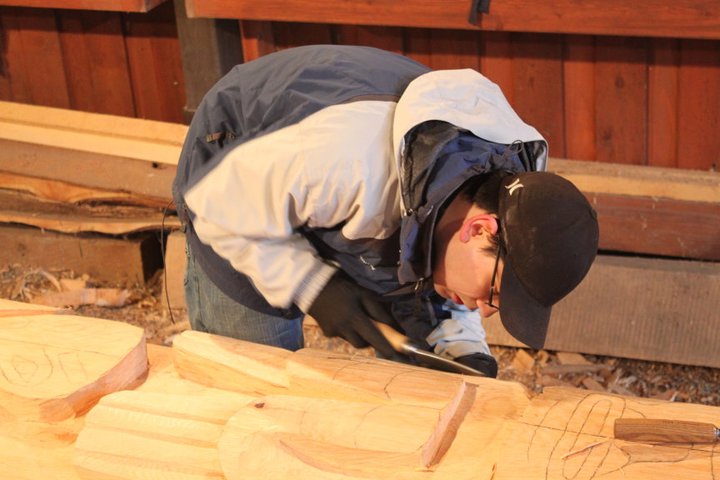 Kenneth “Kelly” White, a CFC Shareholder, began his cultural journey when he was just two years old as a dancer for Cape Fox Tour, LLC. At 14, he transitioned from a dancer into a tour host where he began performing presentations of the Edwin C. DeWitt Carving Center in Saxman, Alaska. During his off time, Kelly watched and learned from Master Tlingit carver, Nathan Jackson. Mr. Jackson influenced Kelly to pick up a utensil and start carving.

Kelly progressed his carving skills through employment at the Totem Heritage Center where he had access to a vast amount of resources. He quickly became recognized and was recommended by the Ketchikan Visitors Bureau as a Tlingit carver to work with Princess Cruises as a “Cultural Ambassador.” During the 2018 summer months, Kelly boarded a cruise ship and performed a two-hour cultural lecture once per day while presenting the carving of a totem pole live. Also during the summer months, Kelly continues to host walking tours for Joe Williams’ “Where the Eagle Walks” giving tourists a Native perspective of Ketchikan by wandering through downtown Ketchikan and the Saxman Native Village and teaching about the Tlingit culture.

Currently, Kelly works as a bartender/server at Cape Fox Lodge (CFL) as well as a private contractor making Northwest Coastal Native Art. CFL management asked Kelly to carve a 5×3 foot panel for the front desk. Kelly accepted and held a Tlingit Historical Lecture & Carving Demonstration where he performed a one hour lecture on Tlingit History while carving the panel.

Kelly has worked on a variety of Northwest Coastal Native Art such as a frog head for the frog wall in Totem Park in Saxman, Alaska, wings for multiple totem poles, as well as numerous panels. Kelly has also raised two totem poles in Southeast Alaska. One of his totem poles is standing in front of the Schoenbar Middle School in Ketchikan, Alaska. Kelly stated this was his “most rewarding” totem pole as he was able to work with the middle school children and bring their ideas to life by incorporating them into his totem pole. His second totem pole is standing on Totem Row in Saxman, Alaska. In addition to carving, he also creates other works of art such as drawings, music, and paintings. Kelly is able to incorporate his culture into each piece of his art pieces and bring enlightenment to Northwest Coastal Native Art. Kelly is a true artist at heart.