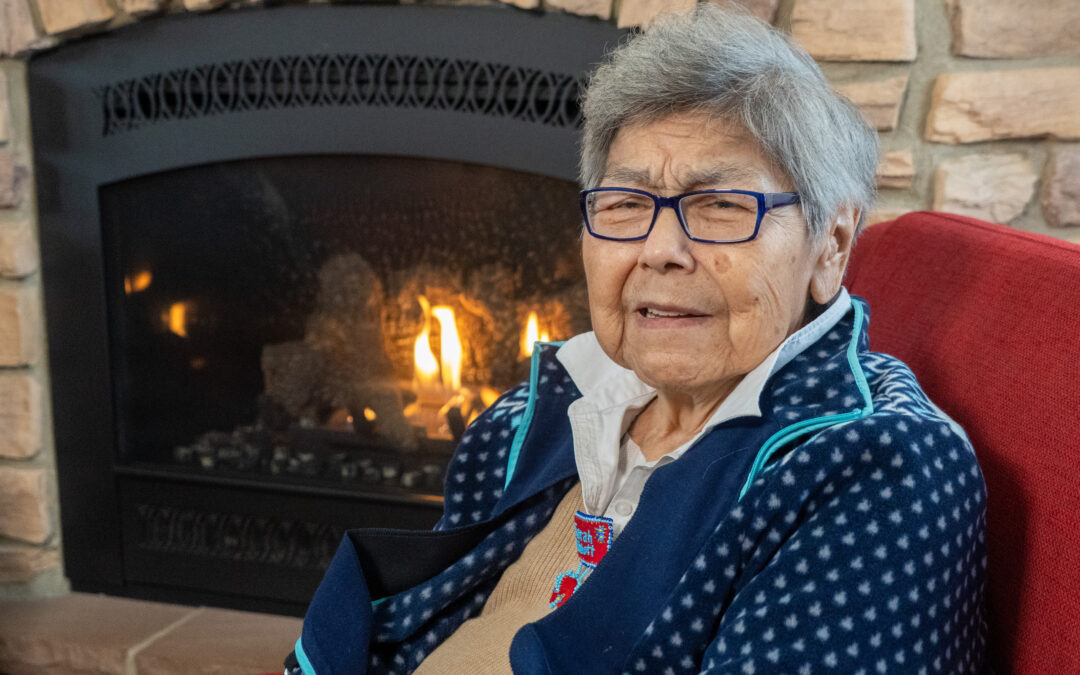 Sarah Abbott is a known Elder among the Tlingit of the Village of Saxman. Her refections of the past remain lessons to future generations. Cape Fox Corporation (CFC) reveres its elders for the knowledge and insights they can impart and the lessons they can teach. This year for our CFC Shareholder Spotlight, we recognize Sarah Abbott as a Tlingit elder, Shareholder, and woman who has passed on traditions that would be of value today to the younger generations.

Sarah was born and raised in Saxman, Alaska. She is a Tlingit from the Raven Clan. Her Tlingit name is Glante, meaning daughter of a princess. Sarah was raised with 12 siblings. Her parents both worked hard and were pillars of the community. Sarah grew up with a happy, peaceful existence without the distractions that many kids of the modern world have with new technologies. They did not have a tv, cellphones, or even a refrigerator. Yet, what she learned as a child taught her the importance of being able to understand the land, celebrate the community, give back to others, and show appreciation to your parents and your elders. Sarah commented, “It was a beautiful life because nothing was in a rush like it is now. Our parents told us how to take care of ourselves. And what we didn’t have, we made for ourselves. If we didn’t have a doll, we made pretend dolls. We were happy with what we had. Sarah learned early on to appreciate what she had and not to constantly be seeking more.

Sarah and her siblings attended a one-room schoolhouse in Saxman, where she said the best lesson taught them was to get along with others. They were not allowed to attend school in Ketchikan. While she does not recall being discriminated against throughout much of her life, she does recall instances such as going to a restaurant, which their dad treated them to every year for July 4th, but they had to eat in a back room away from the other diners. They were segregated and not allowed to sit with others.

These instances of segregation did not dampen Sarah’s life. Her father provided for the family by working two jobs. Each family at the time also had a smokehouse, and no one went hungry. She recalls the hard work her brothers did taking care of all the fish in the smokehouse while the girls worked hard tending their own plot in a community garden. Huge significance was placed on community throughout her life. Her uncle, Joe Williams, Sr., would go out to catch fish and would bring enough back to feed the entire community.

Throughout her interview, Sarah touched on many cultural practices, such as remembering how she helped her mother make moccasins. Her mother tanned hides for the moccasins, which was a long process. As young kids, they were only allowed to sort the decorative beads. As they grew older, though, they were allowed to help design the moccasins. Their mother showed them how to sew the moccasin tops. Sarah’s favorite skill she learned as a child was working on the moccasins with her mother. Moccasins were usually designed with either a raven or eagle and then flowers. Sarah also discussed the process of smoking fish, putting them in a salt brine, tending to the community garden, and hunting. Her father provided food for his family. They grew up eating fish and deer meat. Living off the land was vital to their survival. Plants such as Devil Club flowers were used as medicine. Thorns would be removed, and it would be made into a tea to drink.

While they worked hard for what they had, they did not miss what they did not have. Sarah stressed that they were happy with what we got. When asked what she would like to see from future generations, she noted that she felt much of the culture is being lost because youth do not pay attention to people as much anymore because of the distractions of computers, tv, and cell phones. When Sarah was growing up, people were present in their lives. They did not want for items and learned to appreciate what they had. They did not crave having the best but rather having enough food to eat through the winter.

Throughout their lives, family was revered, potlatches were for celebration and to give gifts away to visiting tribes, and dancing was always present. When they were learning how to dance, they would go to their Uncle Joe Williams, Sr.’s house. He named the Cape Fox dancers even before the Alaska Native Settlement Claims Act (ANSCA) and the establishment of CFC. Saanya Kwan dancers started when everyone moved to Saxman. It is the name of their community. Through her uncle and her mother, they became known as the Saanya Kwan Cape Fox people. While speaking the Tlingit language was not allowed, dancing was always there.

Just as community was pivotal in her life, nothing was more pivotal than family. Sarah would love to teach others who they are, not just what she learned, but what past generations did and how they lived. She believes people should know who they are and their family’s background. She learned a lot from her parents and her aunts and uncles. And one of the essential lessons she learned was that if tough times come, no matter how tough, keep moving. She stated, “if you see someone having a hard time, talk to them, encourage them. We do our best to take care of the ones with us. Never put people down; pick someone up and comfort them.”

Sarah is a truly remarkable woman with much to teach on culture. She wishes that others take an interest to learn their culture, learn the language, and do not always rely on modern conveniences. They do not always make things better when skills are being lost, and the focus on those around you is not primary.