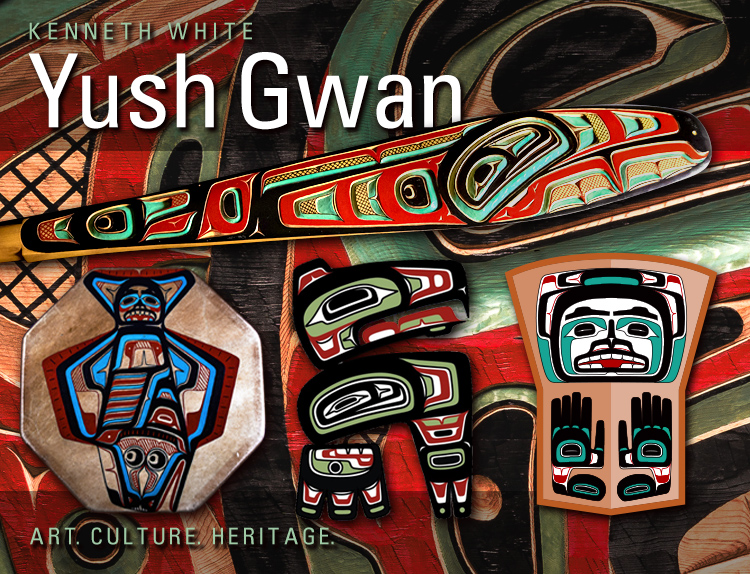 Cape Fox Corporation (CFC) represents the Tlingit natives of Saxman, Alaska.  It is part of the mission of CFC to keep the Tlingit culture alive for future generations of our Shareholders.  In 2020, CFC employed Kelly White as the CFC Artist In-Residence to create Tlingit art pieces that represent the values, colors, and meanings of the Tlingit culture.  Over the past year, Kelly has created several artistic pieces showcased in many CFC commercial business locations or sold to those who appreciate the unique artistic value of Tlingit art.

Kenneth “Kelly” White is of Tlingit descent and a Northwest Coast artist who is Teikweidí Taanta Kwaan and raised by the Sanyaa Kwáan.  At 2 years old, he started dancing inside the Beaver Clan house with Cape Fox Tours.  Kelly carries two Tlingit names “oo wa lúx xu Gleit Kaa” which means Hungry White Man given by Joe Thomas.  Kelly also carries the name “Yush Gwan” which is of a southern dialect Tlingit name given to him by Elizabeth Denny who was the last southern dialect Tlingit speaker.  As a guide at the Totem Heritage Center, Kelly has shared his knowledge of traditional art and culture with visitors from around the world.  Since 2011, Kelly has been a committed carver and artist.  In 2015, Kelly was invited by Princess Cruise Lines to work onboard the ships as a cultural presenter and totem carver for their North to Alaska programs.  During the summer seasons Kelly would travel with the ship sharing his culture and carving with the guests onboard.  In 2019, Kelly received the Bronze Telly Award for a promotional video shown onboard the ships produced by Princess Cruise Lines and Deep Image for their North to Alaska Program.  In 2019, Kelly also took on his current position with CFC as the In-Residence Artist.  He works on several projects including panels, logos, and requested art pieces that are then showcased in CFC commercial business locations.  Finally, in 2020, Kelly was awarded by Sealaska Heritage Best 2D & Relief Carving Division for his Cape Fox Lodge Panel.

While Kelly has had a long association with CFC, over the past year he was able to expand his knowledge and services and has provided many Tlingit-inspired artwork items.  He works hard to keep the Tlingit culture alive through his art.  Visitors to Cape Fox Lodge or many Cape Fox Commercial businesses may have seen many of his pieces.

This halibut drum was one of two drums designed for Cape Fox Cultural Foundation giftshops.  Kelly’s unique approach to his creations mean that he never makes the same design, and each piece has a unique design.

While the design of this drum is less complicated, Kelly’s intent was to keep the colors as traditional as possible.  He did this by using colors that were an earthy hue.  However, he did have the iron-silicate color custom made. Historically, using the blue-green color represented a sign of wealth.

Kelly was asked to create a series of paddles to be gifted to important entities creating unique relationships with Cape Fox Lodge through art.  Kelly was fascinated with older style designs using thin form-lines.  He also began experimenting with the shape of the paddle and balancing the colors, as well as methods to create more spaces for the coveted blue-green color.  Kelly also gained experience with balancing the shapes in the design and using more cross-hatching which had to be applied throughout the entire design in order to bring balance in the design.

This was another paddle given to an important Cape Fox Lodge affiliate.  With every piece of artwork, Kelly strives to extend his abilities and techniques using NWC design and carving.

Tim Lewis and CFC requested a piece of artwork to be placed at the front desk of Cape Fox Lodge.  When discussing his design, Kelly said, “The most important part of developing designs is to create a balance among the entire design, not only balancing the shapes but also balancing the colors of the design.  I had created the shapes in the design as I was working on the panel yet had no idea what the final design would be such as a bear, beaver etc.  After I placed the black form-line, people kept guessing what they were seeing as I was working on the panel in the lobby of the hotel.  This inspired me to create the design as a human in mid-transformation because each person saw something different, and the beauty of artwork is in the eyes of the viewer.  Our culture beliefs explain there is no difference between human and animal except for form hence why I chose a human in mid-transformation because the final shape of the design took place in the viewers interpretation of the design.”

Bentwood boxes were used to store peoples prized possessions and sometimes cooking in.  These are my first two bentwood boxes I successfully completed on my own.  I was experimenting with the dimensions of the cuts in order to make a box fit a business card.  The smaller one was a failed attempt but the larger one I was able to figure out the formula.  The smaller box is in natural state with no stains, paintings or finishes.  The larger box I made has a simple painted design typically seen on the sides of bentwood boxes and I applied a stain, as well as a wax finish.